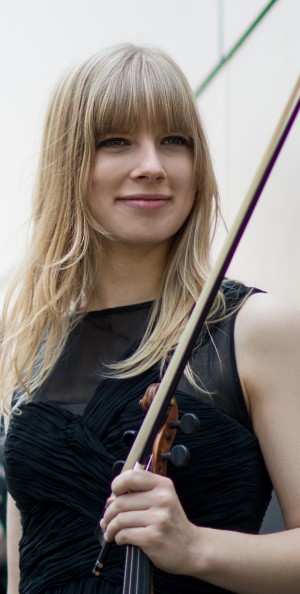 Internationally acclaimed American/French-Canadian violinist Luanne Homzy is highly sought-after for her technical facility, sensitive musicality and expansive versatility. Based in Los Angeles, she works as a studio musician, an arranger/composer, and is the leader of the California String Quartet.

First Prize winner of the International Chamber Music Competition Hamburg in 2009 (with the Saguaro Piano Trio), and of the Canadian Music Competition, she has performed concerti with orchestras such as the Montréal Symphony Orchestra, the Hamburg Symphony Orchestra and the Colburn Chamber Orchestra. Having served as concertmaster for the Colburn Orchestra, the Los Angeles Virtuosi Orchestra,  the American Youth Orchestra and the National Youth Orchestra of Canada, she has worked closely with masters such as Sir Neville Mariner, Gustavo Dudamel, James Conlon, Kent Nagano, and John Williams.

Ms. Homzy has collaborated with renowned artists such as Arnold Steinhardt, Franklin Cohen, Ani Kavafian, Paul Coletti, Ronald Leonard, Niklas Schmidt, Richard Lester, Steven Dann, Paul Neubauer, the Tokyo String Quartet, and members of the Los Angeles Philharmonic. Among the prestigious venues that have hosted her appearance are, Carnegie Hall, Walt Disney Concert Hall, the Banff Center and Izumi Hall. Ms. Homzy has performed in and taught at various festivals including the Bari International Music Festival in Italy, Ravinia’s Steans Institute, Music By The Sea at Bamfield, The Schleswig-Holstein Music Festival, the Mecklenburg-Vorpommern Festival, and the Domaine Forget Festival.

Equally at home in many genres, whether it be classical, jazz, rock, gypsy or Eastern European folk music, Ms. Homzy performs world wide with crossover supergroup Trio Dinicu, hailed as “dazzling” by the San Francisco Chronicle. She has recently appeared with artists such as the John Jorgenson Quintet, Florin Niculescu, and Tcha Limberger.

In addition to her performing career, Ms. Homzy composes and arranges jazz, popular, classical, folk, and world music for diverse performing ensembles. Recent works include her composition "Un Souvenir d'hiver" commissioned by the California String Quartet, her string quartet arrangement of "Viva La Vida" by Coldplay, and her orchestral arrangement can be heard on Kid Cudi's track "Kitchen".

She also works as a studio musician and string arranger. She can be heard (and occasionally seen) on movies and TV shows such as  "The Ellen Degeneres Show", "A Star is Born", "Rogue One: A Starwars Story", "Lalaland", "Glee", "Rent: Live on Fox", "The Pirates of the Carribean" and on albums by Leonard Cohen, Seal, and Kud Cudi.

Luanne Homzy, originally from Montréal, studied with Robert Lipsett and Arnold Steinhardt on a full scholarship at the prestigious Colburn Conservatory in Los Angeles, and later obtained her Masters from the Hamburg Hochschule in Germany with Niklas Schmidt.