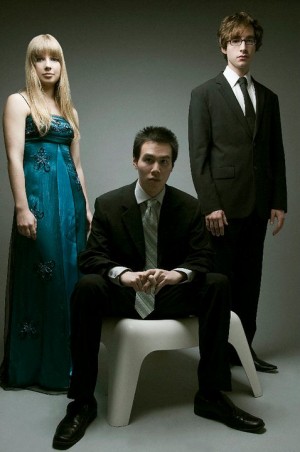 Formed in January 2007 at the Colburn Conservatory in Los Angeles, The Saguaro Trio has burst onto the scene with stunning successes in the world’s most exclusive chamber music competitions. In quick succession, they placed third in the Fischoff National Chamber Music Competition in the United States, and second in 6th Osaka International Chamber Music competition in Japan, both in May 2008. On 26 September 2009 they solidified their reputation as one of the most thoughtful and engaging young ensembles in the classical music world today by taking first place at the International Chamber Music Competition Hamburg, whose jury was lead by renowned Chamber Music virtuoso Menahem Pressler. In Hamburg, the Saguaro Trio also won the special prize for the best performance of a work by Brahms.

The Saguaro Trio has performed in the USA, Germany, Canada and Japan. They were awarded a place on the Claude and Pamela Frank Young Artists Concert, which included a performance at New York’s Carnegie Hall. Since winning the Hamburg Competition they have begun to appear throughout Germany, have been broadcast on national radio, and have been invited to participate in the Schleswig-Holstein and Mecklenburg-Vorpommern Festivals. In 2010 they gave the world premiere of American composer Philip Maneval’s Piano Trio No. 2. In summer 2010, the Saguaro Trio was chosen as Ensemble-in-Residence for Ravinia’s Steans Institute.

In summer of 2011, the Trio was on tour for Chamber Music New Zealand and Musica Viva (Australia). After having adjudicated the New Zealand Community Trust Chamber Music Contest, they took off to perform 15 concerts in the two countries. In June of 2012 they performed and taught at the Bari International Music Festival for 3 weeks.

The Saguaro Trio is currently based in Los Angeles, California.