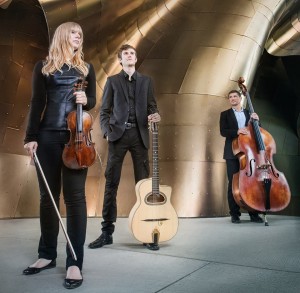 Hailed as "dazzling" by the San Francisco Chronicle, Trio Dinicu combines the forces of three world class musicians - a lightning-fast violinist with touching expressivity, a virtuoso guitarist with gypsy authenticity and a legendary Parisian bassist with deep soul - who bridge the gaps of classical, jazz and folklore, expanding these genres as never before.

Highly regarded for their unique creativity, Trio Dinicu blends the depth of classical training with the spontaneity of jazz and the excitement of the European folk tradition. They have performed for enthusiastic audiences across the United States and Canada at venues such as Djangofest Mill Valley in California and Music By The Sea at Bamfield in Canada, as well as on American National Public Radio. They have also engaged in performances for the underpriviledge in collaboration with the L.A. based musical activists from Street Symphony.

Their repertoire consists of traditional pieces – folk, gypsy, classical or jazz – that the Trio reinvents in its own language, leaving the listener in awe and always wanting more. Each member brings their individual personality to the ensemble, conversing in an inventive and improvisatory language. Their sound honours a select circle of musicians from the Parisian-Russian cabarets and clubs of the 1950′s to the late 90′s. This is where Romanian violinists, Russian balalaika players, jazz Manouche guitarists, French musette players and singers from all over would mingle and create new styles of music. There is also strong influence of the late jazz Manouche guitarist Django Reinhardt in the Trio’s voice.

The Trio is named after the Romanian virtuoso violinist and composer Grigoras Ionica Dinicu, who influenced the one and only Jascha Heifetz and who was admired by Stéphane Grappelli, the world’s most famous jazz violinist.

Their first album, “Trio Dinicu: Live in Los Angeles” is available for order online at djangoguitars.com and is distributed on iTunes by Hot Club Records.

“An amazing hybrid with flavour of Django and Matelo, and guitar player Tommy Davy is putting Los Angeles on the World map of gypsy jazz!”-Jon Larsen, Hot Club Records 2013

“…a steam locomotive of an astounding blend of jazz and classical music
performed with the virtuosity of masters.“- Christopher Donison, Director of Music By The Sea 2013